The two pictures above are from not as well known sites as Madsebakke near Sandvig, the most famous of them all. To the left we have the Blåholthuse carving, a couple of miles from it. To the right Lille Strandbygård on southern Bornholm, near Arnager, and below I have more pictures. Click them to enlarge!

I have added coordinate grids for all standing stones – if you want to find them via Google Earth. But that part of the island Bornholm is unfortunately pretty unclear.

Of course, the interesting thing about this stone carving are both the many ships, even with people, but possibly also the position of the two wheel crosses, placed right above the two lower left ships.

It was sheer coincidence and by using the programme Skyglobe, that I first discovered the following: From early winter 1000 B.C. to late summer 999 B.C. Jupiter and Saturn (the two brightest planets in the sky) stood low in the East-Southeast right before Leo, a very clear constellation. As I interpret it, the two ships below are the planet "boats", sailing them across the sky. Two ships to the top right on the stone may be interpreted as the stars Castor and Pollux in Gemini. No wonder, the men are adoring such a magnificent sight in the sky!

Below you see a star map of the event described above. Have a look and make your own judgment!

There is also an interesting angle to the crosses themselves. Please read about them on my point "Measurements" on the left (coming soon).

Another possible interpretation may be read on my page: Wheel crosses and world ages.

I also use another good astronomy program, called Starcalc.

I have absolutely no "ready made" interpretation of this exciting amount of wheel crosses! But as the whole field with the rock was excavated this autumn, one could see that the rock itself is almost square – and the direction (North) of most of the wheel crosses fit with the general direction of the rock – which has a funny resemblance with the island of Bornholm itself. One understands, why our forefathers saw this rock as sacred…

However, this year (2008) I have made some measurements by means of a "solar compass" that I have made myself. Read about Measurements in my menu on the left. 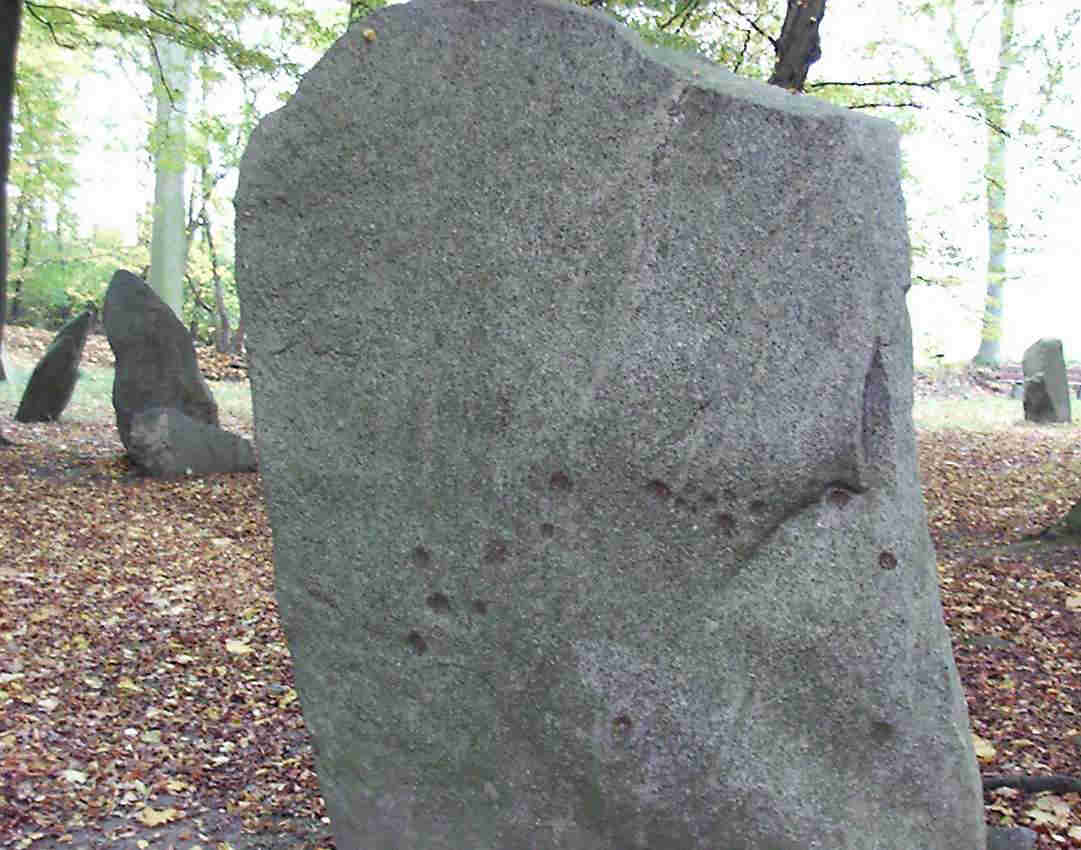 The central stone is interesting here:

Cup marks may have many purposes, but perhaps they also depict real star constellations. If this is the case, then I think we may here be seeing a part of the constellation Pegasus, the socalled squae. It is clearly visible in the right part of the stone. Compare with star map to the right. When I was standing with a compass in front of the stone I could measure, that Pegasus was not visible above the stone in the Bronze Age (or now) – but one would have to turn around 180 degrees – and THEN it would meet your eye high up in the sky!

In the autumn the constellation is seen slanted slightly down to the left, as seen on the standing stone.

Please try it on your own with a compass / protractor. Fertile wondering is always healthy!