If you have been standing looking down at the strange stone carving wheel crosses, especially as seen at Lille Strandbygård, you might simply assume that they have been carved haphazardly – that the ancient people did not care, because they were “primitive” – nothing can be further from the truth!
As our local archaeologist, Mogens Jensen, has often pointed out, the Bornholm stone carving ships show clear sailing directions, particularly towards sunrise and sunset at midsummer solstice, and he has done a great and important archeoastronomical piece of work, especially at the area Madsebakke.

For many years I have also been interested in the Bornholm stone carvings, grave mounds and standing stones, and with my friend, Birgit Bertelsen, I have gone round the island to study them. If the ships sailed in the directions of the ancient (Celtic) holidays – how about the wheel crosses – where did they point?
As I live relatively close to the site Lille Strandbygård, I got the idea after reading an article about the American “Medicine wheels” – namely to make a kind of “holiday compass rose”, that I could place upon the wheel crosses and then decide by aid of a compass what prevalent directions the arms of the crosses were pointing towards.

To find the correct directions I used as a source ”Stjerner, sten og stænger” by E. Laumann Jørgensen (to my knowledge, no English version) and then I added ca. 2 degrees to make it match Bornholm in a middle height above the sea. As the paint stripes are quite broad on the existing wheel crosses, some metres to or fro would hardly make any difference, I hope. 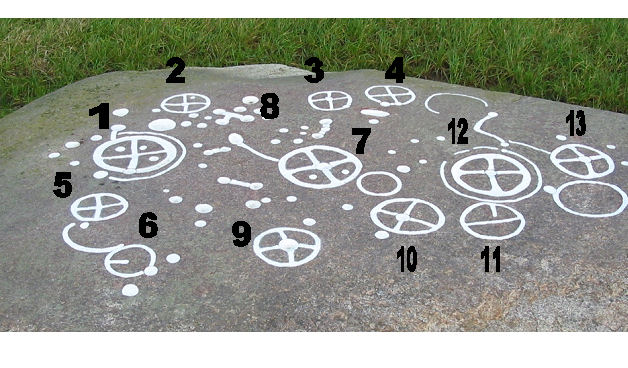 The same method as above has here been used ont the two wheel crosses as well as a couple of ships at the stone carving site Blåholthuse:

First you see the rock itself with numbers inserted, referring to the texts below:

This rock is usually not painted, but has public access. See a painted version here:

My measurements are taken from the photo on the sign at the rock. I have used compass to clarify the directions just lik at the other stone carvings.

I have worked from the large, clear cup mark in the centre, and to my great joy there were clear directions north-south-east-west as well as a possible sunrise in the period from 1/11-21/12 and rise of Sirius. This must be taken with some consideration, as I was working with an illustration of the rock. Please click picture for larger version!