is a bit different from the rest of that in the rest of Denmark. Here I will introduce the various animal groups, but only in a summary. Please use my links and learn much more!

Below you find the animals sorted according to groups, please click. Besides, you are welcome to take a look at my gallery “Animal photos” with pictures I have taken myself.

It is clearly evident that we live on an island – we have no mammals of prey, for example, such as marten and badger. Whether we still have foxes on the island after the mange epidemic in the eighties, is a question still debated among scolars. If we have a population, however, it must be tiny, consisting of only a few individuals.

Of mammals, we have no moles or water voles, either.

But then we have lots of deer – about 12,000 animals, and the population is healthy. Let us hope that it remains so, as the deer on Funen are disease-ridden at the moment.

The deer often come very close – here you see a roe with her young, photographed a year ago in my own garden. 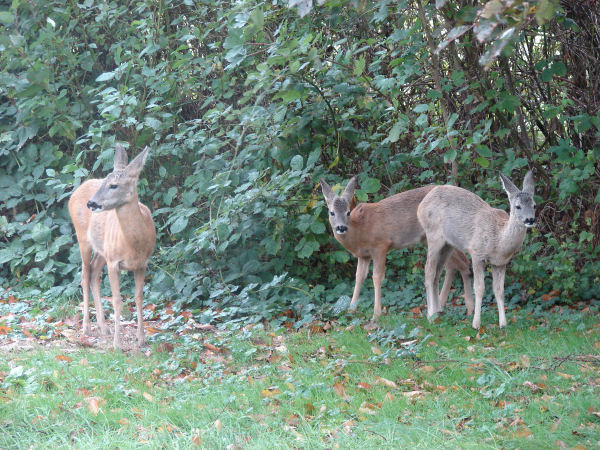 We also have a minor population, presumably about 100 animals, of fallow deer. These are not indigenous, but have escaped from deer farms. I had the luck to photograph a herd of 8 fallow deer on a January day.

The birds of prey fill out the niche of predators, we have many buzzards and other raptors. A very beautiful bird of prey, the red kite, that one may often have the luck to see in Southern Scania, has now also found its way to Bornholm.

In 2007 we were fortunate enough to have peregrines coming to Bornholm. in 2009, we have observed them for the 3rd time, and they nest near Hammerknuden. They had 2 young on the wings in 2007, none in 2008, when the female died – but in 2009 the male had found a new mate, and there were 3 young grew up to fly. The chicks were also ringed and it will be interesting to follow their movements in the years to come.

Here you can see eagles, falcons, owls etc. in free training and learn about their lives. However, these are not Danish animals on display; but the site also has good links to others sites about Danish birds of prey (and much more).

Besides, the island is ideally situated on the bird migration route north-south, and especially in the autumn we may have to luck to see many interesting birds, from Caucasian eagles to Eurasian Hoopoe. In September-October the great crane migrations from Sweden pass the island, and on a single day you may have the luck to see several thousand pass the island and listen to their characteristic call. Watch my little film here. I recorded it near Madsebakke east of Sandvig.

Ornithologists also like very much to go to the Ertholmene island northeast of Bornholm in the autumn for great ring marking actions.

We find both viper and snake on Bornholm, and the black viper can also be found. In fact, a few years ago a boy thought he had found a snake and brought it home after bagging it. Only at home he was bitten and swelled up. He had to go to hospital. From this story we can learn, that animals should not be handled carelessly! And please also remember, that all reptiles and amphibians are strictly protected in Denmark!

We find also common lizards, sand lizards and slow worms (that are not snakes, but a legless lizard).

As for amphibians, we have quite a large population of tree frogs, especially on the souht western part of the island. In the eighties the former Bornholms Amt (county) cleaned up a lot of little ponds, where the tree frog population was in steep decline. But now the ponds are filling up with shrubbery again, and in recent years the tree frogs have also become endagered by shearing the green sides of roads in September, when they migrate from the summer habitats to their winter hibernation places. Where I live, I have been able to enjoy the song of the tree frogs on many a warm May evening, but now, unfortunately, the song is dwindling year by year. On Bornholm we also find the agile frog; but the most famous frog species is the big, green marsh frog that I also find in my garden pond. See my photo here: 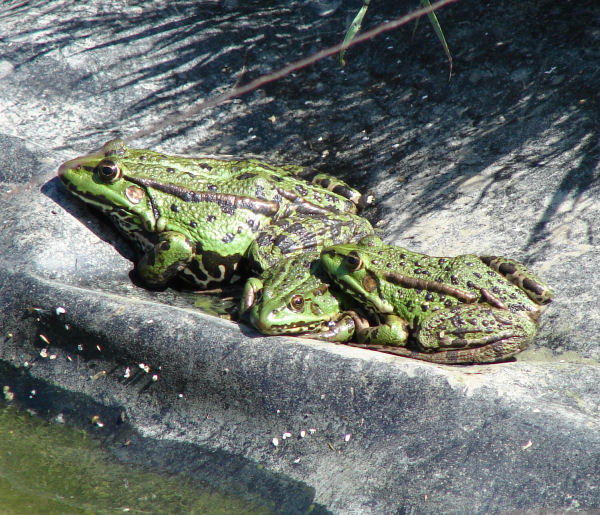 The marsh frog is very characteristic for our island, and in fact the common green frog is a cross breed betwen the marsh frog and short legged green frog. On East Bornholm only the females are marsh frogs, and they must mate with green frogs that have learnt to croak like marsh frogs.

You only find marsh frogs in Denmark on Bornholm.

Moreover, we find large and small aquatic salamander, toad and green variegated toad (also called whistling toad). Some years ago, the population at Dueodde was heavily diminshed when landowners decided to drain the wetland, where they bred. This is strictly forbidden as all amphibians are totally protected! Dueodde beach may be a seaside paradise of sun and sand, but we should think of our little brothers, the animals!

The Baltic Sea is brackish water (0,8% salinity), and of course this influences the fish population. Many people connect Bornholm with smoked herring, but in fact almost all the dishes of “Sun over Gudhjem” that are served on the island are made with herring caught in Kattegat sea, as the Baltic herring has been protected for a long time – however, fishing has again become legal. But the Baltic herring is only big and fat in late summer, and tourists like their herrings big all summer.

The Baltic cod is able to stand the lower salinity in the brackish water and was for many years the most important catch for the Bornholm fishermen. But nowadays it is endangered by overfishing, especially by various Baltic states.

Salmon and sea trout are known by many; the Baltic salmon has very pale flesh; but because of the dioxin contents in the fish, they are only permitted for human consumption within a certain size. This does not prevent angling for all the species mentioned – and the trolling competition each April from Tejn village attracts many interested people. A couple of years ago the biggest salmon caught weighed about 22 kgs.!

Of more spectacular fish both sturgeon and very large catfish have been caught in the ocean near Bornholm, and in the fresh water lakes one can find many fish of species also known in the rest of Denmark.

In the late summer the island is often invaded by immense swarms of ladybirds and hoverflies coming in from the south, annoying the tourists greatly. But these are useful little animals – they eat aphids by the millions and do not harm people, they might at the most nibble a bit at us, if they are very thirsty.

Tick has a very bad reputation in Bornholm, because it can transfer Borelia and other diseases. Its intermediate hosts include deer, that we count in thousands. However, this should not deter anyone from taking a walk in the woods, since it is extremely rare that someone who is bitten, also becomes sick.

A very interesting beetle is the Bombardier beetle, that can be found in a very small area in Southern Bornholm. Read more about it here (not Bornholm, though).

While we are discussing animals that may bite people, we must not forget the Medicinal leech, that was introduced to the island in the Middle Ages by the monks. From the area around Hammerhus it has spread to several ponds in Northern Bornholm.

This was only a brief introduction to the animal life on Bornholm – but please visit the links above – they may lead to even more interesting discoveries!