In Østerlars church, the biggest one, you can see the Apocalypse – and the Devil is relieving himself of something over the damned – is he Baphomet? The face of the devil might be a caricature of a person well known to the congregation. In Nyker church another little devil is whispering into the ear of Pontius Pilate. Not only evil things, but perhaps also mysteries? The Baphomet was a certain code to the Templars of the Sophia, wisdom. Again may I recommend Henry Lincoln, this time his “Key to the Sacred Pattern”. Here he explains about letter codes. The fleur-de-lys was closely connected to Christian mysteries, Mary Magdalene and the Grail – and in Nyker church you can find it among leaves and flowers in the portal above the choir!

But that is not all. The Templars worshipped the head as the seat of wisdom – and above the apse on the outside of the churches of Nyker, Nylars, Østerlars, Knudsker, Ibsker and Poulsker you can see strange round things with eyes even today. On the churches of Nylars and Nyker it even wears a hat! Other churches than the round ones bear symbols that indicate Templar influence. In the bell tower of Bodilsker church a stone is put into the wall, bearing a cross upon a sword or a stick. This cross has a typical crusader shape. See below, in the next picture section.

According to the Danish historian Palle Lauring these heads were symbols of the ancient Norse death god Odin, looking out over the graveyard… and around 1200 the Viking Age wasn’t very far away. Bornholm was christianized around 1050. But perhaps these heads are also Templar symbols? The heads visible today date only back to the 17th or 18th century before the lead roofs were put on the apses. But before that there must have been other heads like the one we see on the front door of Åkirke church (above left). This head is called a lion’s head; but to me it is obvious that we see a bearded man with long hair. And this head is original! Please notice the similarity with the image of Saint Olaf (also original).

Other churches than the round ones bear symbols that indicate Templar influence. In the bell tower of Bodilsker church a stone is put into the wall, bearing a cross upon a sword or a stick. This cross has a typical crusader shape. See below, in the next picture section.
Various types of crosses:

Round churches are not specific to Bornholm; but wherever they can be found there ususally is a very close connection to the Knights Templar or the other orders of warrior monks. Read here what Harald Boehlke has found out in Norway!

And now that we are talking about heads, why not add the hats! 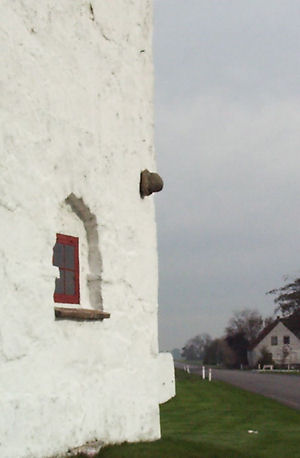 Upon the old belfry of Bodilsker church hangs a strange, hat-shaped stone – perhaps an ancient standing stone that was put into the wall. It is called The Devil’s Hat – and the legend says that the devil got so angry over the ringing with the church bells that he threw his hat at the church – and it got stuck in the tower. In the very vicinity of the church an old grove of standing stones (Gryet “the Dawn”) exists – perhaps a connection with ancient sacred sites?

The “hat” may possibly be part of an old standing stone or similar. Toad stool shaped stones with cup marks (please read more about this in the menu The Devil’s Bowling Alleys etc.) are known from other places.

I have been contacted by a French autor, Max le Martin, who is currently writing a book about “hat stones” in Corsica. Please check out his Flick site here.

Thus it is also of interest, that in 2011 a remanins of a barrow was found during the excavation for building a welfare house near Bodilsker church. An archeological profile of the barrow by the church can be seen here: 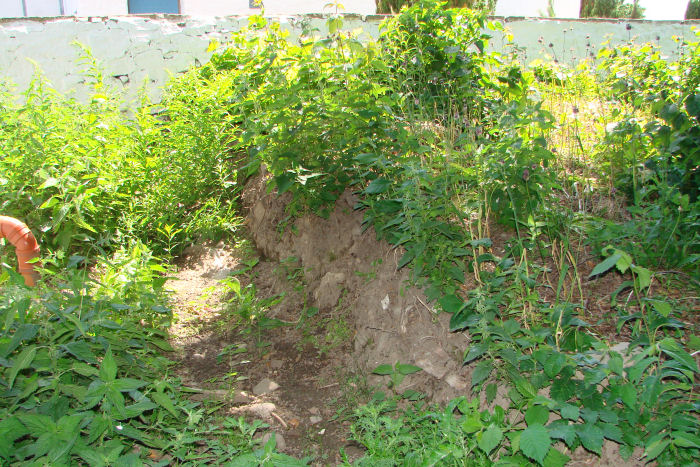 It is typical that pre-Christian sites have often been “reused” for building churches, as we can also see here.

Please continue to my next point on the menu on the left and read about Poulsker church – the forgotten mystery church.