What do the signs of the Zodiac possibly mean? Read Astrology and myth in my menu on the left!

We often say that we are entering The Age of Aquarius, but most people do not realize what this expression really stands for. Usually we think that it has got something to do with magazines and horoscopes, in the best of cases perhaps we have had our personal horoscopes made – perhaps we even know so much about astrology that we can tell what kind of person an Aries, Taurus or Libra is…

This type of "every man's astrology is called the "tropic" astrology. It is oriented after spring equinox in Aries, and that presents a certain problem, as shown later.

But there is a specific astrology, dealing with the World Ages, i.e.. the so-called "sidereal". There is a phenomenon called the precession of the equinoxes, explained here below. Thus we can understand the slow precession of the sun at spring and autumn equinoxes and summer and winter solstices through the constellations of the Zodiac. Nowadays, the sun rises on March 21st in Pisces, (NOT in Aries – this actually happened 4-2000 years ago), therefore we are calling this age the Age of Pisces.

This slow "wobbling" of the Earth axis is due to the fact that the tilting of the Earth changes a little over thousands of years. Earth behaves like a spinning top with its axis through the North and South pole ( read below) This wobbling changes the position of the North Star gradually over the millennia. Right now it is Polaris in Ursa Minor, but ca. 2800 BC the pole star was Alpha Draconis in Draco, and long before this, ca. 12.000 BC Vega in Lyrae was the north star. And further back, ca. 13,800 BC, it was Delta Cygnus in Cygnus.

Read below an explanation, written by a local astrologer:

Images of the Zodiac, corresponding to the Tropic and Sidereal Zodiacs: 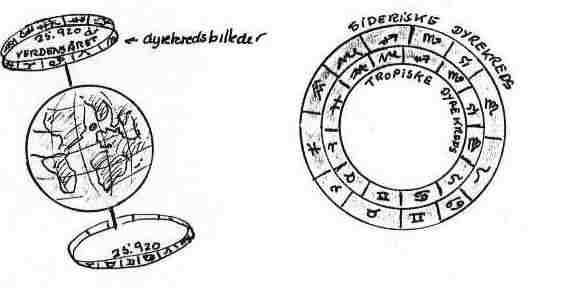 The whole astrological system has been built around the precession and the planet Jupiter. Taking Jupiter first, it has an orbit of 12 years before it reaches its starting point.. That is, taken astrologically, it takes 12 years before it reaches the same sign of the Zodiac. Jupiter takes exactly 11,87 years to reach the same sign and degree of origin. The missing 0,13 years have the effect that after 12 years Jupiter has advanced 5 degrees forward in the sign of origin. After 6 orbits of 5 degrees you can make the following calculation: 5. x 6 = 30. In this way, the planet "walks through" a sign after every 6 rounds..

When Jupiter has moved 72 times round the sun the basis for a circle is formed: 72 x 5 degrees = 360 degrees, and if you divide 360 degrees by 12 you simply end up with 30 degrees, a reference to the calculation 50 x 6 = 30 degrees as mentioned before. Thus, to me, Jupiter forms the basis of the Tropical Zodiac.

The precession of the equinoxes is a retrograde movement through the visible constellations (of the Zodiac). In opposition to the Tropic Zodiac the sizes of the constellations are variable here – the way they really look in the sky. This is called the Sidereal Zodiac. The retrograde movement of the precession of the equinoxes takes 25.920 years. The sidereal Zodiac is also called the Year of the World or the Great Year. The movement of the equinox points is caused by the gravitational forces of the sun and the moon.

Here Jupiter is relevant again, for it seems that the precession and the orbit of said planet form a higher union. Jupiter returns to the same signs 6 times and 6 x 12 years = 72 years. The number corresponds with the 72 times Jupiter orbits the sun to form the basis of the circle 72 x 5. = 360 degrees as mentioned before.

Astrology is as shown above, based on astronomical fact, and you don't have to be a mathematical genius to make the calculations.

Please also read about World ages in my menu on the left!

Quite recent research may also indicate that the Earth moves in a very large orbit around another start – and that THIS may cause the phenomenon, we know as the precession of the equinoxes. This star may possibly be Sirius, situated only about 8,6 light years from us. The Dog Star figures in many ancient legends and myths, but please judge for yourself: Theories by Binary Research Institute.