As you may know, Bornholm has 4 round churches – see below

They are beautiful and very different, but whatever moved the people of Bornholm to build such peculiar churches?

That they were all built between 1150 and appr. 1250 is beyond any doubt. Neither must we forget that the round churches are not the only churches on Bornholm – in fact, 15 churches were built on the island during this period. All of them are extremely heavily built, every one situated at about one hour’s walk from the coastline. Why?

The early Middle Ages was not excactly a time of peace. Pirates from the Baltic area, called Kurland, attacked the Baltic shores, and in Denmark the quarrel between king and church finally led to the victory of king Valdemar the Great at Grathe Moor and his solitary rule over the country. The kingdom was sacred and instigated by God, and the church had to submit to this. It was also the time of the great church building activity, and being practical, the churches were also made fortifications. In the Middle Ages, by the way, the round churches did nok look the way they do today – imagine them with a flat roof with fortifications and ramparts on top, where guards could stand watching the arrival of possible enemies – or perhaps crusader ships, coming in to take provisions on board!

But these were also the days of the Baltic crusades. Bornholms was situated conveniently on the way to Estonia and Latvia, and the island could be used for a “stop over” – provisions could be taken on board. Thus, the churches were also built as storage houses, and in the towers of the conventional churches and in the upper levels of the round churches many things could be kept and concealed behind the several feet thick walls, and things could be kept cool. In Denmark we also know the story of our own flag, Dannebrog, which was said to have fallen from the sky during the battle of Lyndanisse outside Tallin in Estonia on the 15th of June, 1219. A typical crusader’s flag, by the way – like the Maltese flag, only in reverse. Thought inspiring…

More recent research around our large castle ruin, Hammershus, have during the recent restoring moved the age of the castle back about 50 years to the end of the 12th century to the beginning of the 13th century – and this puts the castle in a new and interesting light, namely as a place with connection to the crusades – and Hammershus is placed strategically well for surveillance of the small strait between Bornholm and Scania (which was Danish at that time). And earlier, the East Danish king Svend Grathe had “sold” 3/4 of the island to the arch bishop of Lund, thus giving the church the majority of the power over Bornholm.

And the crusader times themselves may give another explanation of the shape of the round churches. One may easily claim that a round church has no corners – thus being easy to defend – it was also said that the Devil could not hide in the corners – but what about the conventional churches? Perhaps yet another theory is worth mentioning here. The most famous knigths of the Crusades were the Knights Templar and their brother orders (the Maltese Knights, the Brethren of the Sword and the Teutonic Knights), and these warrior monk orders were very esoterically oriented. One may have seen a round church as an expression of the perfection of the Divine, and furthermore, round churches were a kind of reminder of the former church on the Temple Mount in Jerusalem – the Al Aqsa Mosque of today, though it is octagonal.

And finally, lords from Denmark and Bornholm may have been on pilgrimages to the Holy Land and got inspiration to build something similar here?

The placing of the round churches have also been subject of many theories. Here I want to recommend the internet site of Erling Haagensen.

In the traditions of the Knights Templar we also have the myth of the Holy Grail. Such a grail can be seen in Nyker church on the North side. Here we have Agnus Dei, also a typical Templar symbol, with the holy blood pouring into a chalice: 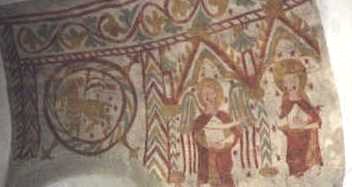 Erling Haagensen also calls Nylars church the “treasure church”, a place to keep riches, weapons and spoils from the crusades – perhaps also as payments for the soldiers and knights.”

During my research in the recent years it seems obvious that a brother order of the Templars, the Teutonic Knights, living by the same monastery order as the Templars, were working especially in the Baltic region – their task was to protect German knights during the crusades. Bornholm had a close connection with the Hanseatic league all through the Middel ages, especially Lübeck, so this could be a clue…

Ont thing, though, is visible all over Europe: Where you find round churches (e.g. Temple Church in London) there has been a connection with crusades.

We also have three other round churches in Denmark. The building style is somewhat different – e.i. there are four supporting pillars instead of one central piller as on Bornholm. I have taken this photo of Bjernede church near Sorø, Zealand. 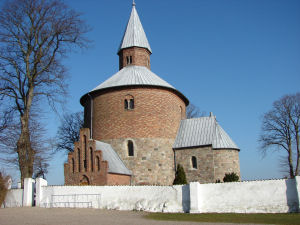 Besides this one, we have Horne church on Funen. Read more…

And finally, I have visited Jutland and taken this picture of Thorsager church in Djursland.

Perhaps it is less known, that there are also several round churches in Sweden.

One very similar to the Bornholm round churches is found near Kalmar,  please visit this link:

Another typical “Bornholm style” round church, now built into a larger church in Valleberga, Scania (not far from Ystad). Much material can be found on the internet about this church, but no photos. However, I took the ones below:

But the churches are filled with even stranger, ancient pagan symbols.

Olsker church is hallowed to Saint Olaf, the Norse saint, who, besides being a historical character, may be a Christian version of the ancient Viking god Thor. His symbols were an axe (in pictures very much like Thor’s hammer) and on the porch we see him with a staff or axe, stepping on a serpent (the Midearth Snake).

The staff or axe was often the symbol for the world axis, e.i. the North Pole, around which all the star constellations are turning. It is therefore thought-provoking that we in Olsker church, the northernmost of the round churches, find Saint Olaf with his staff in North. Inside the church on the North side we also find a strange little man in a fresco with a dog’s head, surrounded by stars and holding a serpent in his hand! Who was he? Perhaps the death god Anubis from the Egyptian mythology? We must not forget when we look at the starry sky that he may be Sirius, the “dog star” in the constellation Canis Major (the Great Dog). The Knights Templar travelled a lot – and the wisest ones were initiated in the ancient mysteries and the faiths of the Middle East. See the pictures below:

But please remember that for the Templars, the gnostics and the kathars, the serpent was not evil. It was a symbol of wisdom! The serpent symbolising the Middleearth snake, the serpent holding the world in its grip, was also a symbol of the zodiac.
Please read more about strange heads – choose the point in my menu on the left.